Sherry Wilde, Ambassador for ETs assisting our ascension, says they want us to know:

“We are all one with our Creator–all living things, all sentient beings everywhere throughout the universe.

“We are multidimensional beings on multiple levels–more than one level at a time.

“Monitor your thoughts; everything happening in the world is a result of thoughts. replace fearful thought with ones that are positive and loving.”

Sherry Wilde lived an idyllic life as a wife, mother and business owner until 1987 when her community experienced a UFO flap that was considered one of the most active in the world. No one could have ever guessed the unbelievable turn of events that would occur over the next 18-24 months as Sherry was forced to accept her involvement in a phenomenon that was totally unknown to her.

Faced with the indisputable evidence that she was experiencing contact with extra-terrestrial beings was astonishing to this pragmatic and levelheaded woman of 37, but to learn her contact had been ongoing for her entire life almost pushed her over the edge.

Sherry spent the next several years of her life trying to exonerate the experiences from her mind and did her best to return to a normal life, but when heavy contact started again in late 2009, after several years of relative peace, she could no longer ignore it. Inexplicably she found herself writing a book about the encounters as her memory opened up to the past events and the teachings these beings had imparted to her.

Overcoming her fear and learning the truth of her involvement with these ultra-dimensional beings became her life goal. She now accepts the truth of these encounters and has cooperative contact on a regular basis with the beings she affectionately refers to as “her guys.”

Sherry has had an overwhelming amount of physical contact with beings from an alternate reality and has worked her way through the layers of disbelief, fear, confusion and ridicule. She found support and answers in places she never expected and through that process began to remember the truth of who she is.

In the series of interviews at https://wp.me/p1TVCy-4Uc Sherry shares highlights and intimate details of that journey and talks about the differences between being an abductee and a volunteer.

Sherry’s the real thing; I have looked into her eyes, felt her heart. She, like many of you, is an ambassador of powers that value us Earthlings and our beautiful planet.

More on Sherry Wilde, what she learned from ET, how she learned it and how you too may have received messages for humanity from nonordinary sources at https://wp.me/p1TVCy-4Uc

At the STARGATE TO THE COSMOS CONFERENCE, learn more about ETs here and the direct experience our presenters have had with them, as well as the opportunity to explore your own ET and UFO contacts with others and to expand your memories with professional hypnotists. Stargate’s October 25-28, 2018, MCM Elegante Hotel, Albuquerque, NM www.stargatetothecosmos.org 808-214-3442

Get Ghost’s Gist:  SPEAK WITH A DEPARTED * 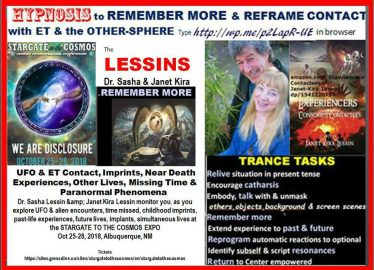